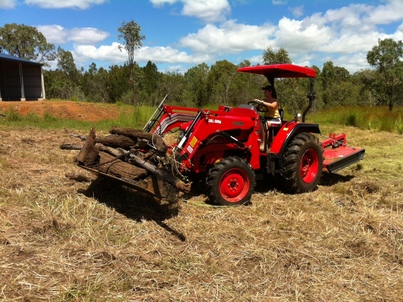 "Over the last seven years, I have seen six neurologists, and each one sent me for a Lyme disease ELISA test. This test came back negative  every time.  I had come across Lyme in my own research but believed I had been tested for it in the ELISA , so I didnt think it was an option. If any of the specialists I saw had acknowledged that Lyme disease is a clinical diagnosis, and that the sensitivity of Elisa is extremely poor, and had opted for Western Blot testing, I would have stood a better chance of being treated before the disease had spread throughout my body and progressed to the chronic stage."

Picture: Leah operating the tractor pre-illness.
Leah's Story (Shared 2013)
I became suddenly ill early 2006.  At the time I was probably the happiest I'd ever been. I'd recently received a promotion in my job as a child protection solicitor. I would train my 2 competition horses before work in the early morning and was going to the gym in my lunch hour.  I had married my childhood sweetheart the year before.

On 25 January 2006 I was walking out of the gym and felt a tight sensation around half my head like a bandage. I then got a splitting pain through my left eye and could no longer walk straight.  I started stumbling to my left like I was really drunk and a lot of people were staring at me.  I made it to a bench and collapsed.  Some time later I remember making it back to the office by hanging on to walls, or whatever I could and I told my boss I felt like I'd had a stroke or something very strange had happened.  She had given me a document and I couldn't read any of the words on it.  I was able to walk again so I drove to a local doctor.  He did some tests and as I was walking out I began to walk sideways again and fell into the wall. He told me he suspected a brain tumour and called the ambulance.  I spent the night in emergency where they did tests to rule that out and I was told they suspected MS.  I remembered laughing at the idea of this as I was so healthy. I got a referral to see a neurologist.  I was put back in an ambulance 2 days later by a doctor telling me it was a brain tumour again.

Every 4-6 weeks I would have new symptoms arise.  I was still sleeping most of the day and night, my symptoms included fatigue levels that were totally disabling, overheating and vomiting daily, balance problems, severe joint pain, migraines that caused me to write backwards, pins and needles in arms and legs, bowel and bladder problems, severe chest pain that radiated down my left arm and up my neck, severe shortness of breath, seizures, trigeminal neuralgia, bells palsy and pre-fainting symptoms every day, night sweats and uncontrollable shivering.

Testing on my brain revealed that my cognitive function went from superior range to remedial. I tried to continue working as long as I could.  My boss was very supportive and gave me only very simple tasks which I still could not complete. I even walked out in the middle of a mediation and I was found down the street with no idea where I was.  I've lost my career due to this illness and my ability to have children.

Neurologist No 1 put me in hospital straight away, saying it was most likely MS. After weeks of tests not confirming this he said I must just be stressed because of my job.  Neurologist No 2 told me it was MS and hugged me saying she knew how difficult this time was.  A few months of tests later she referred me to her mentor as she couldn't confirm it.  Her mentor, Neurologist No. 3 spent the appointment yelling at me saying I was ridiculous for thinking I had MS when my MRIs were clear. She thought it was my idea! I then saw a more general physician for endless tests and once my heart began to be symptomatic I saw a cardiologist. He thought the muscles around my heart and arteries were spasming consistent with MS.

My insurance sent me to another Neurologist (No 4) who told me he thought it was all in my head as my test results did not match my severe symptoms.  The insurance then sent me to a psychiatrist to see if I was indeed crazy. The psychiatrist gave me a clear bill of mental health and said I was genuinely physically ill.  When I was admitted to hospital for trigeminal neuralgia for a week I saw neurologist No 5. He spent the appointment telling me that he had bipolar disorder and he could therefore see it in me. When I referred him to my psychiatric report confirming that I was normal, he said that I was very  intelligent and had used my intelligence to manipulate the psychiatrist!!  He yelled at me very aggressively when I would not agree to his diagnosis, saying "you solicitors are all the same" and that "I would never get better until I admitted it" (the biploar).  At the time I was having seizures, though as my husband was overseas working I had no one there to witness them. No one believed me and I even tried to film them, so that I had proof.

I'll never forget how sad Neurologist No 5 made me. I just went home and sobbed feeling totally alone and hopeless.  I was scared that I would die before anyone actually worked out what was wrong with me.

The physician then referred me to a Rheumatologist, who concluded that I was indeed seriously ill. He said that he feared something life threatening had been missed and made an urgent appointment for me with his Neurologist friend (No 6).  After 3 years of being abused by specialists when they couldn't fit me in their box to diagnose me, he said to me that MS can take many years to show up on tests and that we would keep going until we found it.  He said I had Dysautonomia which is dysfunction of the central nervous system and we did endless tests to find out the root cause of it all, while suspecting MS would evolve. I saw a 2nd cardiologist that diagnosed me with severe vasovagal syndrome and said I was in the worst 1% in the world. This remained my position for 3-4 years.

Over these 7 years I have had numerous trips in the ambulance with severe chest pain and breathing problems or with symptoms resembling a brain tumour.  I have had endless hospital visits and have been tested for every obscure disease you could imagine. MS was mentioned every time as the most likely cause but many different Cancers, Parkinson's, Addison's, Narcolepsy, Epilepsy and every autoimmune disease on the books have been tested. I have lost count of the  number of MRI tests I've had, I've had blood tests almost every week, urine/stool tests, heart monitors and extensive testing of my heart function and clotting, SPECT scans of my brain, CT scans. I estimate that we have spent over $30,000.00 on top of private health and medicare in trying to diagnose my condition.

Late last year I saw a program on Lyme disease on "Sunday Night".  As I listened to the Lyme sufferers on the television bravely share their stories I couldn't believe how similar they were to mine.  I began to research Lyme and the Igenex laboratory in California that specialised in Lyme tests. When my blood tests came back with positive results, I still did not believe it meant that I had Lyme after all this time. We drove 14 hours to see a Lyme specialist who diagnosed me with late stage Lyme and another tick-borne infection, Babesia. I am now 3 months into Babesia treatment and I am so thankful to have an answer.  I feel a lot of anger that this illness could have been treated and cured very simply if it was diagnosed early.  Now that it has reached late stage I have years of treatement ahead of me to get it into remission and the fact that I've been wrongly treated with steroids on different occasions during this time will make my recovery harder. After seven years I am still pursuing my income insurance.  There is no government assistance with the cost of medication for this disease, which costs thousands of dollars.

Over the last seven years, I have seen six neurologists, and each one sent me for a Lyme disease ELISA test. This test came back negative every time.  I had come across Lyme in my own research but believed I had been tested for it in the ELISA , so I didnt think it was an option. If any of the specialists I saw had acknowledged that Lyme disease is a clinical diagnosis, and that the sensitivity of Elisa is extremely poor, and had opted for Western Blot testing, I would have stood a better chance of being treated before the disease had spread throughout my body and progressed to the chronic stage.

I have not left Australia in the 27 years prior to my diagnosis of Lyme.

I am so thankful to the "Sunday Night" program for raising awareness of this life threatening illness.  I owe my life to those that shared their stories so that I too could find a diagnosis.  It's just a shame the Australian medical profession couldn't find it.  How many people have to die or have their lives destroyed before this illness is recognised in Australia?