Lyme Disease (LD) / Lyme Borreliosis is described as a vector-borne disease as it is spread via the bite of arachnids (ticks). It should be noted that there are also various other methods of transmission, some confirmed, and others requiring further research. These methods include:

1. Evidence that blood sucking insects (other than ticks) are able to transmit Lyme disease
2. Contact (urine passed) transmission has been noted in mice, and
3. Human to human transmission : sexual and mother to baby (vertical)
4. Organ and Blood Donation

These areas are examined in further detail (with references provided) on the Lyme Transmission : Various Transmission Methods page of this website.

In order to address the problems with the lack of recognition of Lyme, the focus of the information on this page is on the well known ability of the tick to spread and transmit Lyme Borreliosis.
How Lyme is Transmitted and Maintained in the Environment

The transmission and maintenance of the bacteria responsible for Lyme disease / Borreliosis within the environment requires the tick and host animals. The host animals may be thought of as either reservoir hosts, which are small to medium size animals that carry the spirochete infection within their blood and the larger host animal for which the adult of a particular species of tick has an affinity (30). There is some question as to whether or not larger mammals such as sheep, deer, horses and cattle simply serve to amplify the infection within the environment, by providing the tick with a host blood meal or whether they also serve as reservoir hosts of Borrelia. In general, the studies show mixed conclusions. These findings are discussed further in the ‘ Scrub Tick Haemaphysalis longicornis and associated Mammal Vector & Reservoir Hosts ’ section. With regards to the smaller/medium animals,  there are over 50 mammalian and avian species that are reservoir hosts of Borrelia (31) and include various mammal species such as: mice, rats, voles; hares; rabbits; squirrels; hedgehogs; dogs: as well as numerous species of marine and land birds including puffins, blackbirds and pheasants.
Ticks and Human Disease

Ticks are classified as arachnids (eg: spiders, mites, scorpions), as they have eight legs, rather than six as with insects (32). There are approximately 850 species of ticks worldwide that are divided into two families, the Ixodidae (hard ticks) and Argasidae (soft ticks). Both are vectors for human disease, although in the case of Lyme disease it is the Ixodidae family that has been associated with transmission. The family of Ixodidae tick itself has approximately 650 different species, divided into 13 genera including; Ixodes, Amblyomma, Haemaphysalis, Rhipicephalus and Dermacentor (33).

The first ticks found to be competent vectors of Borrelia were of the Ixodes genera: I. scapularis (Previously known as I. dammini, before being shown to be same species), and I. pacificus (Black-legged Tick), commonly known as deer ticks in America. In Europe and Asia, the vectors were found to be the I. ricinus (Castor Bean/Sheep Tick) and I. persulcatus (Taiga Tick). Since these early investigations, many more species of ticks have been identified as vectors. This includes over a dozen more species of Ixodes ticks, as well as ticks from other Ixodidae genera’s including, Amblyomma, Haemaphysalis, Rhipicephalus and Dermacentor. (A table of these ticks is presented at the end of this section, as can be seen a number of them are in Australia).

The basic implication of these findings is that there are many ticks that are capable of carrying and transmitting the bacteria that causes Lyme disease. What all of the ticks typically have in common is that they are three-host ticks. This simply means that they attach to a different host in each stage of their life development. Once the tick egg hatches to the larvae, the larvae need to find a host to attach to for a blood-meal, it then drops off and molts into a nymph.  The nymph repeats the action of finding a host for a blood-meal before molting into an adult. The final blood-meal is then sought by the adult before dropping off, with the females then laying eggs. It is due to the attachment on three different hosts that these ticks are able to firstly be infected and then spread/maintain the disease within their environment.

Typically the larvae and nymphs feed on smaller animals within the environment, with the adult ticks then attaching to larger hosts (eg: deers for I. scapularis; sheep in the case of I. ricinus). It is the smaller/medium sized animals that the larvae and nymphs feed on, that act as reservoir hosts for the Borrelia bacteria that play a large role in maintaining the infectious cycle.  When the larvae or nymph ticks feed on the reservoir hosts, they are then infected, and upon attaching to their next host, may pass that infection on. Whilst humans are not the preferred host, if they inadvertently come into contact with ticks, (walking through bush or long grass) then they may be at risk. It is usually at the nymphal stage that humans are infected, as at this stage of its life, the tick is barely large enough to be noticed and as ticks inject an anaesthetic into the skin of the host when attaching, the tick may feed and drop off without a person even realising.

A key to reading the Tick Vectors of Lyme Disease/ Borreliosis Table:
​The relevant ticks are listed, firstly under the country/continent in which they are found and then under their relevant Ixodidae genera, eg: Ixodes, Amblyomma, Haemaphysalis, Rhipicephalus and Dermacentor. The “scientific” name for the tick is firstly given, with the more common name (if applicable) in brackets; Animal hosts of the ticks are mentioned, with:  {I} denoting hosts of Immature ticks ie: larvae and nymphs and {A} for the animal hosts of the adult ticks; If it is a second listing for the tick, that is, the tick is found in more than one continent/country, the animal hosts of the tick are not listed again. Tick species that have been recorded as being in Australia are highlighted in red. 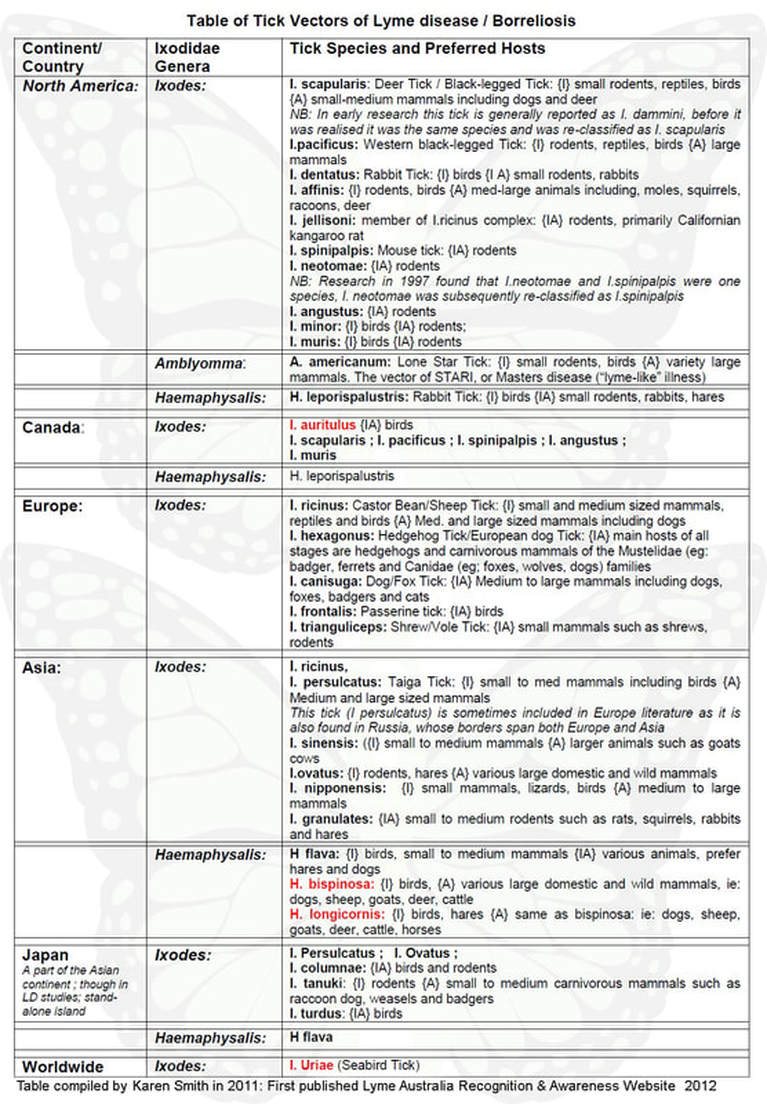 ​The above table, though comprehensive, is not a complete list of ticks involved in the Borrelia cycle around the world. The main aim of the table is to show how many various genera of the Ixodidae tick family are involved in the Lyme disease/ borreliosis cycle. The existence of Lyme disease in Australia was denied by Russell et al., (1994) and continues to be denied by the NSW Department of Medical entomology (of which Russell was the Director until his retirement in mid 2012), and the NSW Health Director of Communicable Diseases, Dr Jeremy McAnulty, in part due to the fact that Australia does not have any of the first four ticks (ie: I. scapularis, I. pacificus, I. ricinus, I. persulcatus) that were initially identified as vectors of Lyme in the United States and Europe. As the tick table demonstrates, there are numerous tick species that are involved in the Lyme borreliosis cycle and these species can be different in various countries.  Australia has a number of tick species (highlighted in red) that are involved in the cycle, and these are discussed in further detail in the following segments:

Birds as Vector and Reservoir Hosts in Borrelia (Including examination of I. uriae  (seabird) & I. auritulus (bird) ticks

For Journal article references for Borrelia Vector / Tick Vector capabilities discussed, see the Reference list below.
Tick  location and animal hosts in the above table were sourced from a variety of places. The majority of information is  from:

Please note: Any information with regards to Lyme disease that is freely available at numerous locations on the internet has not been  referenced. For specific facts/arguments, see the reference list.

NB: Reference section is separated into segments for ease of updating information
References 1-29 can be seen / are relevant to the Lyme Transmission : Various Transmission Methods section.

How Lyme is Transmitted and Maintained in the Environment. Ticks and Human Disease

I. scapularis and I. pacificus:  Well known vectors

I. trianguliceps:
(a) Gorelova NB, Korenberg EI, Kovalevskii  JuV, Postic D and Baranton G (1996) The isolation of Borrelia from the tick Ixodes trianguliceps (Ixodidae) and the possible significance of this species in the epizootiology of ixodid tick-borne borrelioses. Parazitologiia;30(1):13-8.  http://www.ncbi.nlm.nih.gov/pubmed/8975209


Tick/Vector References Further to the above: